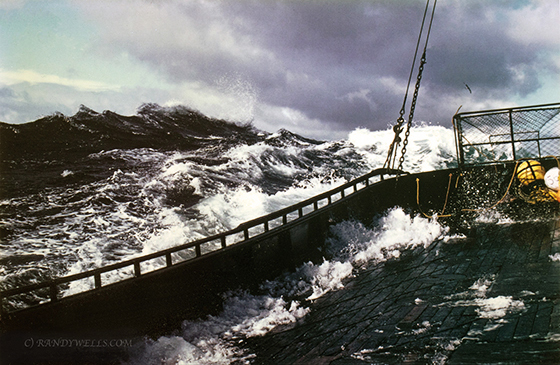 MY FATHER WAS CHUCK WELLS

Chuck Wells and his Alaskan king crab boat, the F/V Shaman, from 40 years ago were little known on the Internet until an on-line article appeared last year.

My father was one of the shrewdest people I’ve ever known. He was way ahead of his time. Although he made and lost millions, I’m still proud of him. I made this image onboard in 60 knot seas, which was our limit for pulling 800 pound pots.

When he stopped fishing crab in the late ’90s, the concept of a “World’s Deadliest Catch” dramatic TV documentary was just getting started.

He started fishing in Cordova, Alaska in the ’50s (where I was born), with a sail powered salmon gill net boat. Later, he had a gas engine powered salmon boat. I’d spend maybe two weeks with him during the summer mending nets and taking in the Copper River flats at their most serene best. Shallow waters were always where the best catch was.

When the seas got really rough, he’s send me packing, if just to appease my mother. The rest of the time he was away in bars with his buddies or welding aluminum gill net rollers in our basement. Not an ideal father, but I knew he cared about me.

He avoided death his whole life, from being an Army sharpshooter in WW II, to starving in a German prisoner camp, to losing boats in bad weather, but it was those AI gases that eventually killed him with Parkinson’s, just like asbestos killed my grandfather who worked on de-commissioning aircraft carriers in Bremerton, WA.

From salmon seining as a highliner in Cordova, my father graduated to king crab fishing in Kodiak, and he had the top boat there for over a decade during the ’70s and ’80s. He was voted one of the top 100 fishermen in the world and never lost a crew member under his stewardship. I fished seven summers in Alaska with him or whoever had a spot open on a commercial fishing boat that year. I scattered his ashes off Kodiak with his closest friends when he passed away.

Here’s a part of his story as told by my friend and crew chief, and the person who knew him best, Tom Hendel:

Before she was the Wild Alaskan, she was the F/V Shaman- and she ruled the King Crab fishery